Who doesn’t know the co-founder of Microsoft, Bill Gates? Everyone knows right. We all know that Bill Gates is one of the richest persons in the world. We all would have an image of how the world’s richest person’s house would look like. Today I am penning down some of the interesting facts about the Bill Gates House. The richest person in America has extravagant homes and may seem very interesting if you have never read it anywhere. Let’s have a look at Bill Gates house inside. 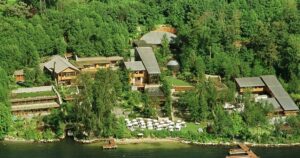 Bill Gates house has a lot of greenery and it is eco-friendly so that it helps in regulating the heat. The construction of the pacific lodged-style mansion used more than half a million wood logs, fir timbers, stainless steel roof, and a concrete foundation with steel reinforcements to make sure that it is strong enough to prevent earthquake damage. It is known that nearly 300 workers worked on the site and it took 7 years to complete the manifested design.

Bill Gates named his house Xanadu 2.0 since the mansion bears a resemblance to Charles Kane’s residence, Xanadu in the much-celebrated movie Citizen Kane.

A private tunnel is constructed to reach the compound to highway 106. The tunnel reaches the massive compound of the Bill Gates mansion. The mansion has 84 steps to reach the ground floor. 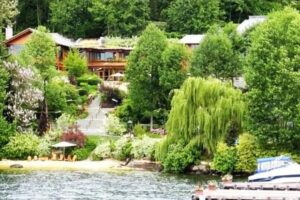 We all know that many millionaires would have a private lounge or private theatre at home. But, have you ever heard of the private beach? Yes, the Bill Gates house has, private beach, and what is more interesting than this is, the sand is imported from Hawaii.

The tech-savvy house. The founder of Microsoft owns the technology-enhanced house. There are a lot of sensors installed in the house to monitor the climate, temperature, music and lighting system. If someone doesn’t like the artwork on the walls of the room, they can change the artwork along with the music. Speakers are hidden behind the wallpapers which allow the music to follow you from room to room. The guests will be granted access to change the temperature of the room according to their requirements. Astonishingly, Bill Gates has his favorite tree which is watered electronically every 24 hours. In case the tree gets too dry, it is immediately watered. It is a 40-year-old maple tree.

The house is equipped with a 25,000 sq Ft gym and the exercise floor has a trampoline room with a 20-feet ceiling.

Bill Gates house from inside- Mr.Gates owns a stream of water at his residence, with some aqua pets like salmon and other fish. Isn’t it nice? Yes, there is an artificial stream of water running down to the lake from his house. 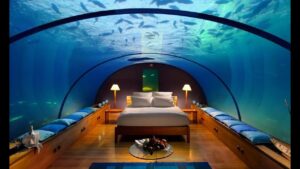 Bill Gates’ house has 7 bedrooms, 6 kitchens, and 24 bathrooms. Out of 24 bathrooms, 10 bathrooms have a bathtub. The house also accommodates a spa, sauna, and meditation room. The dome roof library with a total area of 2100 Sq Ft, has an amazing collection of books and 2 secret bookcases. Adding on to this, the library owns a 16th century Leonardo Da Vinci manuscript which was bought by Gates at an auction in 1994 for a whopping USD 30.8 million. The reception part of the house can accommodate 200 guests and has a 22-foot-video screen on one wall and a 6 feet-wide limestone fireplace on the adjacent wall.

The house is designed to hold a 60-foot-long pool with an underwater sound system. There are several garages at different locations of the property. In one of the underground garages, 10 cars can be parked. It is made of stainless steel and concrete. One of the living rooms has an aquarium that showcases rare and exquisite views into the world of rare marine animals. The guest rooms were completed first, before the other areas of the properties. Since the guest rooms were equipped with high technology sensors, it was meant for testing and then adapted to the entire house or the property. It is 1,900 square-foot of excellence with a bedroom and bathroom.

The privacy at the Bill Gates house is to the next level. The property is so private that no one is allowed inside the gate even for the documentation. The video tour of the house was auctioned for the huge price of 35000 Dollars. The amount earned goes to the company’s charity fund. An intern of Microsoft was once allowed inside the house of Bill Gates for some work purposes in 2007, and his experience within the mansion is shared in one of the blog posts on the Microsoft website.

Well, these are some of the fascinating facts about the tech-savvy house of, one of the richest persons in the world. Everyone would like to have a glimpse of this house. No wonder that Bill Gates House is equipped with extravagant luxury along with technology, eco-friendly, and sustainability.

There is more: Check out the video on Bill Gates House