Inside Antilia House of Mukesh Ambani

Who doesn’t know Mukesh Ambani, one of the richest men? Everyone knows. His house, Antilia meaning- named after the phantom island Antillia that was reputed to lie in the Atlantic Ocean, is as popular as he is. It is the second most expensive home in the world. Mukesh Ambani, who regularly features in the Bloomberg Billionaires Index list, also holds the title of the richest man in Asia and is ranked the 12th richest man in the world. The chairman of Reliance Industries, India’s largest private sector company.

Here is everything you need to know about Mukesh Ambani’s skyscraper customized house and Mukesh Ambani house inside view.

Mukesh Ambani house, named Antilia, is located in the heart of south Mumbai, at Altamount Road, Cumballa Hill, one of the costliest areas. Mukesh Ambani’s house from inside is not less than any 7-star hotel. Antilia has a total land area of 400,000 sq ft. The building is named after the mythical island Antilia in the Atlantic Ocean.

The design and construction of the Antilia were handed over to two renowned companies in the US, I,e Perkins & Will, and Hirsch Bedner Associates. The design was approved after Nita Ambani was impressed by their work at the Mandarin Oriental New York. The construction work was started in 2004, by Leighton Asia. The architects altered floor plans and design concepts as the construction of the building progressed. It is a 27 storey cantilevered beam house, constructed and customized by the international Construction company. The high-ceiling glass tower makes the mansion as tall as a 60-storey building. The 570-ft mansion stands taller than most buildings in the area and is visible from a distance in all directions. Antilia has W’-shape beams that support the upper floors. The building construction and interior work were completed in the year 2011. Antilia took around 7 years to get completed. 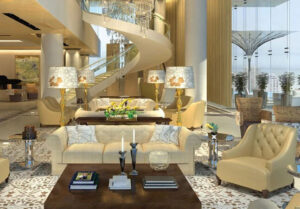 Everyone wants to know what the house of the billionaire might look like. The antilia is a 27-floor structure, with more than 600 people working for them. The whole of the building is designed keeping the sun and the lotus in mind. Only these designs are repeated all over the building. The interior of the building is made up of crystals and marbles. No rooms or the space in the entire building is similar to the other room. The ceilings are extra high that the 27-floor Antilia is as high as 60 floors. Among the extravagant amenities, Antilia boasts of three rooftop helipads, a six-floor car parking that can accommodate 168 cars at a time, a 50-seat movie theatre, three floors of Babylon-inspired hanging gardens, a yoga studio, a fitness center, a ballroom, nine elevators, a swimming pool, a spa, a health center, a temple, a snow room and accommodation for a staff of 600 that live in the property to carry out its maintenance. Antilia is designed to sustain an earthquake of magnitude 8 on the Richter scale. The pooja room is not less than any temple in Antilia. It is built up of top-quality marbles and can accommodate around 50 people.Mukesh Ambani’s car parking is 6 floors. I guess you got an idea of how Mukesh Ambani’s house looks inside. 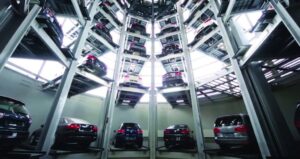 Before construction, the worth of the plot and unbuilt house were estimated to be more than US$1.2 billion. It is considered the world’s most expensive private residence. It is known to be the most valuable property after Buckingham Palace. It is reported that Antilia requires an expenditure of Rs 2.5 crores per month. Mukesh Ambani’s house inside interiors, amenities, and Mukesh Ambani’s car parking and total house price in rupee terms is approximately Rs 15,000 crores. Mukesh Ambani’s house inside interiors is all according to vastu shastra

We all know how religious and how much they believe in the almighty. There was a time difference between the completion of the property and Mukesh Ambani’s family moving into Antilia. It is said that both Nita Ambani and Mukesh Ambani, are huge believers of Vastu Shastra for home. Because of some Vastu defects in the property, even though their grand home was ready in 2010, they moved to Antilia in the year 2011 after the pujas were done to remove the Vastu compliant. However, before moving in, the Ambani family conducted a 10-day Griha Pravesh puja, inferred to be a combination of many rituals meant to clear the Vastu doshas (defects) in Antilia. Media reported that a team of 50 renowned pandits, led by Ambani family priest Ramesh Ojha, were part of the 10-day puja.

Conclusion- This was all about Mukesh Ambani’s house Antilia. It is also a known fact that Ambani’s are private people and don’t share much of their private life and space in Public. This is all we know about the house.

Ans: Reliance Industries Limited (RIL) Chairman Mukesh Ambani continues to be India’s richest man for the 10th straight year with a net worth of Rs 7,18,000 crore, according to the IIFL Wealth Hurun India Rich List 2021

2. How many employees are there in Antilia?

Most Expensive Houses in the World