The bank is the most trusted financial institution among the public. This institution fulfils all our financial needs. We all know that the banking sector went through a new start in the year 2020, and previously in the year 2017, the State Bank of India took over State Bank of Mysore. The Bank Mergers In India included 10 public sector banks merging into 4 banks and the consolidation work was in progress from 2107 to 2020. Finally, the banks were merged in the year 2020 and started operating from 1st April 2020. Till today the confusion persists regarding this merger.

What Is The Merger Of Banks? 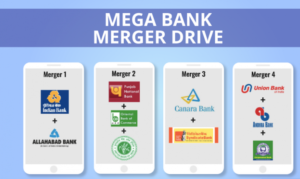 The merger is the agreement between the independently operating bodies, where their assets and properties come into a legal agreement and start operating as a single entity. The government of India decided to merge 10 public sector banks into 4 banks to restructure the Indian banking system.

As of today, India has 12 Public Sector Banks, including Bank of Baroda and State Bank of India. I will mention below the list of merged banks in 2021.

As of today, India has 12 Public sector Banks. The name of 12 PSBs are:

When the government of India decided to redefine the Indian Banking System, the merger took place in various stages. In the first round, there were 27 state-run banks in 2017 and then the State Bank of India took over 5 of its associates and came into force from 2018.

The banking service has seen a huge improvement and the merger of the banks has enabled a large capital base and better offers for the public. The banking products like insurance, loan, mutual funds have better interest rates and are striving to work in favor of the customers. It is always technology involved and the merger has made the banking sector more technology-oriented. The Indian financial condition and equity have always been increasing since the merger of banks.

What are private sector Banks?

Private Sector Banks refer to those banks where the majority of the stake is maintained by private individuals. Private banks provide all the services similar to the public sector banks. Most private sector banks are very agile in their financial strategy. Even though these banks follow the nation’s central bank’s guidelines, they can formulate their independent financial strategy for the customers.

Private Sector Banks offer quick service to the customers and these banks also offer customized services according to the customer’s financial needs.

This was all about the merger of banks, Public and Private sector banks.

It was formed on 26 September 1946 as a representative body of management of banking in India operating in India – an association of Indian banks and financial institutions. Indian Banking Association is managed by a managing committee, and the current managing committee consists of one chairman, 3 deputy chairmen, 1 honorary secretary and 26 members.

Well, the Indian Banking system is huge, and it is just a small piece of info regarding the Merger of banks and their operations. For more updates on the blog posts, subscribe to our website and channel.