Basavanagudi is one of the oldest areas in Bengaluru. It is one of the beautiful localities of south Bengaluru, which still has the charm and the aura of old Bengaluru. According to the history of Bengaluru, the term “Basavanagudi” was coined to refer to a “Bull Temple” in the area. It’s a monolithic Nandi Bull statue. Basava means bull in Kannada, in the native language, and Gudi means temple. As a result, Basavanagudi was born. According to the records, the temple was built by Kempegowda, in 1537 AD. Every year, a groundnut fair called Kadale Kaayi Parishe is held near the Bull Temple region in honour of this tradition. Every year, all of the local farmers gather to gift the sacred bull their first groundnut crop.

Basavanagudi is a commercial and residential locality, This area is home to various ancient and magnificent temples, notable institutions, vibrant marketplaces, lush greenery, parks, little lakes, and fantastic eateries. It is one of Bengaluru’s oldest localities. This neighbourhood was once a shelter for Kannada-speaking scholarly Brahmin families and other high-ranking individuals. There were numerous spacious roads surrounded by shady trees, as well as large homes and European-styled bungalows, in this peaceful location. Today, this once-green, verdant area has practically devolved into a concrete jungle, densely populated by economic migrants from various Indian states. Today, this extremely quiet residential paradise has evolved into a bustling business hub. Jayanagar, Dvg Road, Gandhibazar, VV Puram, Kanakapura are the nearby Localities to Basavanagudi.

Basavanagudi has some historic and legacy restaurants in and around the locality.

Puliyogare Point is another eatery point, that can compete with Vidyarthi Bhavan in terms of flavour and quality. Puliyogare point as the name says, they make the most flavour full and the delicious puliyogar. For someone who doesn’t know what puliyogare is, it is tamarind flavour rice. They also serve, Sakkare Pongal, Normal Pongal, Coconut Rice, and Button Idlis as well.

Subbamma Stores
If you like traditional junk food like, chakkuli, kodbele, avaarekaalu mixture, then there is no other place like Subbamma Stores. This establishment, which opened in 1947, is known for its handmade goods and traditional condiments. 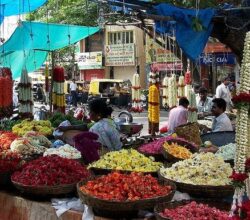 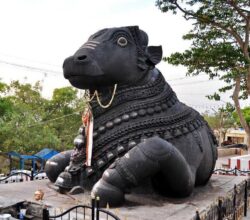 New Modern Hotel also called NMH, is where the majority of Basavanagudi residents begin their day. It is located in VV Puram, Basavanagudi. The hotel’s traditional old ambience, local cuisine, and the splendour of Basavanagudi are all must-see attractions. NMH is a legendary hotel with the aura of the Darshini Hotels.

VB Bakery is one of the city’s oldest bakeries and is popular with people of all ages. It is so well-known in Basavanagudi and South Bengaluru that it has become a household name. Because this bakery is located near the city’s popular Thindi Beedhi or the food street. Congress masala bun, honey cake, masala rusk are quite popular among the localites.

Chat street or the Tindi Beedhi at VV Puram is every Bangalorean’s favourite. The chat street is always full on weekends and on weekdays it’s fairly crowded. From South Indian special foods to chats, North Indian foods like rotis, paan and desserts, everything is available in a street. If you are in Bengaluru never miss to visit this chat street.

Apart from the above-mentioned eateries and restaurants, there are a lot of so many Upahara darshini, Mahalakshmi Tiffin centre, By 2 Coffee, Kumat bugle rock, Brahmins coffee bar, Hotel Dwaraka. These are some of the very popular eateries which are hit among the people of Basavanagudi.

If you enjoy shopping and are looking for a bargain, Gandhi Bazaar is the place to go. It is one of the city’s most dynamic neighborhoods, where you can obtain anything from groceries to vegetables to clothing and other accessories at a discount. This is one of the shopping centers located in the central business district. The Gandhi Bazaar is always crowded and it is a fit place for a Sunday outing and shopping. One of the busy shopping place in Bangalore. Gandhi Bazaar fruit and flower market are always busting with people. The locality gets almost everything you need to run a household. It is set amidst lush green trees. Gandhi Bazaar has most of the shops run by locals and you can find everything from home décor items, cosmetics, clothes to festive shopping.

If you are in the nearby locality and want to feel the vibe and charm of old Bengaluru, visit Basavangudi.

The Rock Garden( Bugle Rock) – It is the city’s only rock garden. Bugle rock is more than just a collection of rock formations. It has a lovely park, as well as waterfalls and fountains. Bugle rock park is one of the most popular destinations among the local people & has around more than 500 visitors every day.

One of the main attractions in Basavanagudi is the Dodda Ganesha temple, also known as Satya Ganesha. The tremendous size of the Ganesha Idol, which is 18 feet tall and 16 feet wide, gives this idol the name. This temple has a long history dating back to Kempegowda’s reign. The king happened to come across a large rock that resembles Ganesha. Later, he instructs his sculptors to create an idol of Lord Vinayaka and constructs a temple devoted to him.

Basavanagudi receives its name from the Vijayanagara empire’s Bull temple, which was built in 1537 by Kempe Gowda. The stone Nandi (Bull) is positioned on a pedestal in the temple.  This is reported to be the world’s largest Nandi Idol, with a height and length of about 15 feet and 20 feet.

Gavipura cave temple is a rock-cut architecture in Bengaluru. The temple is dedicated to Lord Gangadhareshwara. Stone discs are famous, as is the mystery of enabling the sun to shine or a shrine to open at a specific time of year. Kempe Gowda built the temple dedicated to Lord Shiva in the 16th century AD.

King Chikka Devaraja Wodeyar, who ruled Mysuru at the time, built this temple in the Dravidian and Vijayanagara styles. A temple dedicated to Lord Venkateshwara, which was constructed in 1689, is adorned with sculptures.

The legendary Kadalekai Parishe (Groundnut Fair) in Basavanagudi, which takes place every November and pays respect to this delightfully mysterious tradition, deserves special note. Farmers began sacrificing their first harvest of the season to Lord Basava at the Bull Temple in the 16th century. Traditional meals and a variety of carnival diversions bring in a joyful ambience.

VV Puram Avarekayi Mela – VV Puram Chatstreet is also popularly called the tindi beedhi. During the season of avarekalu, every shop or eatery makes a special dish out of avarekaalu. Every year avarekaalu mela attracts thousands of food lovers from across the city.

The above-mentioned places are the highlights of the locality. Some of the other highlights are, Sri Govardhana Kshetra, Uma Theater, Raadha Kalpa Dance Company, Sri Rama Temple are some of the popular places of interest in and around Basavanagudi.

Popular schools and Colleges in and around Basavanagudi

Swasa homes and Concorde luxepolis are some of the luxury properties in and around the locality.

Conclusion- Basavanagudi is one of the most vibrant areas in Bangalore, and we can call it the heart of South Bengaluru. Basavanagudi is known for its ancient temples and historic buildings. It’s a destination where you feel everything, walking on the streets of Basavanagudi, with the fresh aromas of the flowers, and the aroma from the gandhige angadi is what strikes you. Basavanagudi is unique in it own way. Visit the place and let me know in the comment section what did you enjoy the most.