Everyone knows that Bengaluru is the capital city of the Karnataka State. Everyone loves the city. But, how many of us know the history of Bangalore? Not many rights? Today I will pen down the history of Bengaluru.

Who is the founder of Bangalore? 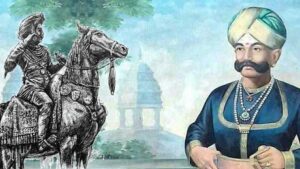 Kempe Gowda I founded Bangalore as a city in 1537, when he built a mud fort on the site with the help of king Achutaraya. However, the first indication of a City called Bangalore dates from around the year 890. Kempe Gowda was succeeded by Kempe Gowda –II, his son. He worked on the beautification of the City. The Kempegowda is the name and the person behind the history of Bangalore.

In 1761, the fort was rebuilt in stone. From 1831 to 1881, when the raja was reinstated, Bangalore served as the British administration’s headquarters. Nonetheless, the British maintained an administrative and military presence in the city until 1947, when India gained independence. Bangalore has afterwards proclaimed the capital of the new state of Mysore, and it remained so through the 1956 state reorganization, then Mysore was renamed Karnataka in1973. History of Bengaluru has a lot to tell.

How Did The City Get Its Name?

Bangalore was known as Bengaval-uru in the ninth century (city of guards). According to another tale, it was renamed Benda-Kalu-ooru in the 12th century (town of boiled beans). The name ‘Bangalore’ has its origins in the Kannada term ‘Bengalooru.’ An old anecdote tells the account of how this city got its name. King Veera Ballala of the Hoysala Dynasty once struggled to make his way out of the jungle. In the jungle, he came upon an elderly and impoverished woman who had only boiled beans to offer the monarch. The king was overjoyed to be treated so well, and he dubbed the entire city ‘Benda Kaal Ooru.’ This translates to “city of boiling beans” in the local language. According to the earliest mention, about the history of Bengaluru, which dates from the ninth century, the name began in Begur as an inscription on a hero-stone, long before King Ballala’s reign. The stone also showed that Bangalore was once part of the Ganga Kingdom and was known as the City of Guards or Bengavaloru till the Chola Empire was established in 1024 C.E.

In 1638, Shahaji Bhosle, the Maratha leader and father of Shivaji (founder of the Shivaji Dynasty), seized Bangalore. His elder son was killed during his reign, and Shivaji vowed to get vengeance on his enemies. The Mughals conquered Vyankoji Bhosle (son of Shahaji) in 1686. After a few years of dominance, the kingdom was leased to Haider Ali, the Kingdom of Mysore’s commander-in-chief.

After his death, Tipu Sultan, his son, was in control of Bangalore’s economic development. The British assassinated Tipu Sultan during the Fourth Anglo-Mysore War in 1799. During this time, many temples were built, and Bangalore was hit by a plague epidemic in 1898. The city also faced a severe water shortage. Bangalore was ruled by the British till the country gained independence. In Bangalore, India, electricity was first introduced to Asia in 1906. Tippu Sultan’s name is of prominence in the history of Bengaluru. 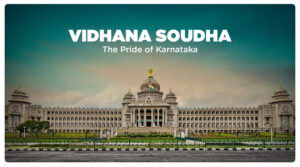 The Bengaluru city underwent massive transformations after independence. The Vidhana Soudha, which was erected in 1954, is now the seat of Karnataka’s state legislature. Bangalore remained a part of the Mysore State after independence, and it was renamed Karnataka in 1973. Kumara Park, Sadashivnagar, and Jayanagar arose over time. All these are now popular public attraction places and important places to visit in Bengaluru.

In terms of education, public sector employment, real estate market, industry, and finance, significant changes occurred between 1941 and 1951 and 1971 and 1981. Bangalore’s IT industry exploded in the year 2000. Bangalore has earned the titles of India’s Silicon Capital, Garden City, Pub City, and Fashion Capital. Many of Bangalore’s streets are still influenced by the British. For example, Brigade Road, Cavalry Road, Artillery Road, and so on. Bengaluru city saw a massive development.

Suwarna Karnataka Celebrations on the Golden-Jubilee of the state presented a proposal in December 2005 to rename the city Bengaluru from Bangalore. Finally, in 2006, HD Kumaraswamy made the name change official. Other cities, such as Mangaluru, Mysuru, Hubbali, and others, were also undergoing name changes at the same time.

According to the research, the history of Bengaluru has so many directions. Initially, the entire city of Bangalore was divided into markets or Petes, with the Doddapete Street running north to south and the Chickpete Street running east to west as the two main streets. Doddapete Square, or the center of Bangalore, was named after the intersection of two streets. Kempe Gowda was followed by his son, Kempe Gowda –II.

By constructing temples and tanks, Gowda-II contributed to the beautification of Bangalore. He also built four watchtowers to define Bangalore’s border, which can still be seen near Mekhri Circle, Ulsoor Lake, Kempambudhi Tank, and Lal Bagh, which were constructed 500 years ago. These are also the places to visit in Bengaluru. Bengaluru has a lot to offer, lakes, parks, monuments, and markets. Then there are the delectable treats that are eye candy in and of themselves. These watchtowers are mentioned anywhere in the History of Bengaluru.

The North Tower is located near the Mekhri Circle underpass, next to Ramana Maharshi Park, in a well-kept park, with a few headless statues on the mantap. The remainder of the tower is in fine condition. This is one of the few towers that is situated on level ground rather than a hillock.

The site is exceedingly attractive, with the tower practically invisible, located on the summit of a hillside by the Bandi Mahakali temple near Kempambudhi Lake Hanumanthanagar. It is bordered by woods and rocks.

The Lalbagh Tower, located at the end of Double Road on a hillside in Lalbagh, is the most frequented of all the towers. The Bangalore skyline may be seen from this vantage point. According to the Geological Survey of India, the tower is built atop an ancient rock estimated to be 3,000 million years old.

The military keeps Ulsoor Lake’s tower in excellent condition. They use this location to train their employees. Unless specific permission is obtained, the general public is not permitted to visit this location.

The above-mentioned four watchtowers are also the prominent places to visit in Bengaluru.

Earlier it was known that the boundary of Bengaluru ends at these four watchtowers. But as and when the city and the population grew, Namma Bengaluru has grown extensively.

Temples of Bengaluru are the prominent places to visit in Bengaluru. Bull Temple (in Basavanagudi), Anjaneya Temple (at Avenue road entrance), Gavi Gangadhareshwara Temple, and Ulsoor Someshwara Temple were among the many temples built by Kempe Gowda (made additions to the existing structure built by the Cholas). 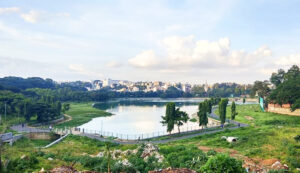 Kempe Gowda came up with various water tanks and reservoirs around the city to supply water for household and irrigation needs. The Dharma Budi, now the beautiful bus terminal, i,e Kempegowda Bus Terminal and Kempambudhi tanks were constructed for residential use, while the Sampangi tank was constructed for irrigation. Aside from this, there were a number of other lakes in Bangalore and the surrounding area. There are so many tanks and lakes, which attracts more visitors and have been added to the list of, Bengaluru Places to visit.

Other important places to visit in Bengaluru are the forts, built by Kempegowda. Forts are always part of the history of Bengaluru. The Kempe Gowda I and II have built 9 Forts to fortify Bangalore and many of them are favourite trekking spots today. Savandurga, Nandidurga alias Nandi Hills, Makalidurga, and Devarayanadurga are some of the most popular forts among the public attractions. Hutridurga, Huliyurdurga, Channarayana Durga, Kabbaladurga, and Bairavadurga are among the lesser-known ones and are crowded by residents and are not so famous among the trekkers. These forests are now in a deplorable state.

Lalbagh was established by Hyder Ali. There are so many places to visit in Bengaluru, which contributes to the history of Bengaluru.

British Rule in the History of Bengaluru and Bengaluru Palace

Bangalore grew quickly under the British Commissioners’ watch. It is believed that the Bengaluru palace came up during British rule. Under British direct governance, infrastructure, law and order, missionary education, and health services all improved. The Wodeyars had aligned themselves completely with the British, and the region had finally reached a state of peace. The fierce revolt of 1857 in North and Central India had no effect in Bangalore. 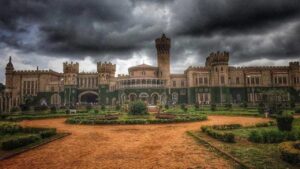 The British Guardians and Maharaja used their finances to acquire the property from Rev. Garrett in 1873. They were in charge of his schooling and administrative instruction in preparation for his accession to the throne in 1881 AD. Since the young Maharaja did not have a suitable place to reside during his training in Bengaluru. The construction of the Bengaluru palace began in April 1874 and was completed in 1878. With fortified towers, battlements, and turrets, the Bengaluru palace was designed in Tudor Revival style architecture. Elegant wood carvings, floral themes, cornices, and relief paintings on the ceiling adorned the interiors. The furnishings were neoclassical, Victorian, and Edwardian in style. The Bengaluru palace has a 45,000-square-foot floor area and 454-acre grounds. This is a glimpse of the history of Bengaluru and the Bengaluru Palace.

Some facts about the education Hub Bengaluru

Central College Bengaluru (1858) is one of the oldest colleges in India. This college was originally affiliated to the University of Mysore in Mysore State. It is now Bengaluru University. Arts, Science, Commerce & Management, Education, Law, and Engineering are the six faculties that make up the university. It is home to 43 Postgraduate Departments, a Postgraduate Centre in Kolar (established in 1994-95), three constituent colleges, 665 associated colleges (115 of which provide PG courses), and a number of other centres and directorates of higher learning and research. The institution currently offers 50 postgraduate courses as well as employment-oriented diploma and certificate programmes. The five-year Integrated Courses in Biological Sciences, Social Sciences, Earth and Atmospheric Sciences, and Business Studies, as well as the four-year B.S. programme, have been launched by the institution. Bengaluru University has a lot to offer to the students and every year thousands of students pass out from the Bengaluru University.

The Bengaluru layout was planned by Kempe Gowda and it is very evident in the History of Bengaluru. The east-west street was called Chickpet, and the north-south roadway was called Doddapete, later renamed “Avenue Road”. He devised an intriguing strategy to streamline the activity of traders by developing different layouts, each catering to a specific trade or specialty. Chikkapete was for smaller enterprises while Doddapete was for large businesses (Dodda means large in Kannada) (Chikka means small). There was an Akkipete for rice traders. Ragi Pete is a ragipete that is used by ragi dealers. Balepete for bangle traders, Ganigarapete for oil traders, Nagarthapete for gold traders, Gollarpete for cowherds and cattle traders, Kurubarapete for sheep traders, Thigalarapete for Tigala community farmers, Upparapete for salt traders, Aralepete (now Cottonpete) for cotton traders, Kumbarapete for pot traders, and many other pets and they still exist.

Today Bengaluru city has developed in all the dimensions widely. Everyone knows Bengaluru as the Silicon City or as the IT Hub. But, the latest development is the Narasapura Industrial Area is one of the largest industrial regions in Karnataka State, and it is the Automobile Hub. The growing population and the job opportunities created has made Bengaluru city grow rapidly. Well, this is just a small glimpse of the History of Bengaluru.

1. Who is the founder of Bengaluru City?

Ans. The Kempe Gowda I

2. What is the old name of Bengaluru?

3. What is Bengaluru Famous for?

Ans. Bengaluru is called the IT hub, tech companies and many start-ups.