10 Interesting Facts about the Kingfisher Towers

Thinking of buying an apartment at the Kingfisher Towers? 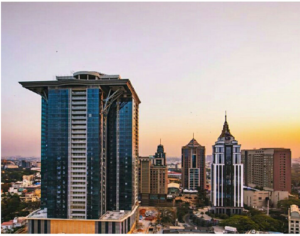 Prestige Group is by far the most premium residential development in Bangalore City.The Prestige Kingfisher Towers were developed by Prestige Group, one of the biggest property development companies in South India. Prestige was founded by Razack Sattar in 1986 and has its main facilities in Bangalore. Besides the Prestige Kingfisher, they have also developed properties in Chennai, Kochi, Hyderabad, Mangalore, Mysore and Udaipur. Funnily enough, Prestige Group began as a retail business and only moved to real estate with its first project, called Prestige Court, at KH Road. And, the rest is history. Today, Prestige Group has completed 192 projects, spanning around 64 million square feet, most of them being commercial offices, apartments, shopping malls, villas, hotels, golf courses, retail and leisure & hospitality. And among these, we have the Kingfisher Towers. UBHL owns 55% of the tower, while Prestige Group owns 45%.

The Prestige Kingfisher Tower is considered a high-rise residential apartment comprising of 3 Towers of 34 floors each. Every Floor has an exclusive apartment with an area of 8321 Sq.ft with a Private lift lobby the project overlooks the magnificent UB City, Cubbon Park and offers breathtaking views of the city’s most happening locality. Kingfisher Towers comprises of luxury 5 bedroom flats spanning the entire floor of each tower with an area of 8321 Sq.ft Each residence at Prestige Kingfisher Towers has its own lift lobby, service lift area and exclusive access to the project’s amenities that include a clubhouse, swimming pool and gymnasium.

Each residence at Prestige Kingfisher Towers gets 5 covered car parks. The project is designed to employ architectural techniques includes its notorious roofline. The project also benefits from facilities such as a clubhouse, swimming pool and tennis courts. Additional features of the project will include large balconies for each unit with views of the surrounding areas such as Cubbon park, UB city and Museum.

The spacious homes include average areas of 8321 square feet and they are all built to the highest standards and exact specifications in terms of materials, technologies and finishes. A key part of Prestige Kingfisher towers’ success is the Prestige brand value, which is known for its ultra-luxury standards of design and construction.

Fact 3: Apartments begin from the 5 floors and up

The apartments of the Kingfisher Towers begin only from the fifth floor and up. The higher you go, the higher the price. The first four floors and the two floors in the basement are reserved for car parking, and each resident would be getting around five car parks. 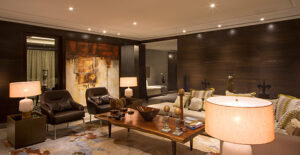 Fact 4: Backstory of its location

Many people often forget that the Kingfisher Towers were built on the site that used to be liquor baron Vijay Mallya’s ancestral home. The project was built on a 4.5-acre land has 81 apartments in three blocks with a total of 34 storeys. The 40,000 sqft penthouse on the top two floors belongs to Mallya. However, In 2016, the Enforcement Directorate (ED) had attached Mallya’s properties worth Rs 6,630 crore, seizing his farmhouse, flats and FDs. It might have been built at his home, but he’s not there anymore.

It’s expensive pricing is mostly due to being an extension of UB City. UB City is a luxury business district in Bangalore that consist of six main blocks: UB Tower, Kingfisher Plaza, Concorde, Canberra, Comet and, of course, the Kingfisher Towers. In total, the built up area is around 16 lakh square feet. UB City was pioneered in a Joint venture between UB group and Prestige Group, hosting around 1MN square feet..of high-end commercial, retail and service apartment space. UB group stands for United Breweries Holdings limited, which markets beer under the

Kingfisher brand that gave the Kingfisher Towers its name. Homes in Kingfisher Towers are usually handed over to its high-profile buyers even as United Breweries Holdings Ltd’s share of apartments remain largely unsold. Another feather in UB City’s hat is, UB Tower – the tallest structure in Karnataka as of date, measuring up to a height of 123 m, the tower houses the UB Group offices. Standing at 115 m, Concorde Block is the second tallest structure within the UB City complex, followed by the Canberra Block which stands at 105 m

Fact 6: Vijay Mallya had a secret entrance there

Since it was an ambitious project, Vijay Mallya spared no expense when building the entries to his apartment. The apartments have five points of entry, but originally, only two were used. Most residents used the Kasturba Road Cross entry, and Vijay Mallya had a separate entry from Vittal Mallya Road when he used to live there. This separate entry was adorned on one side by a 39,000 square feet private garden that used to lead him to his personal lobby, which is a home office, and like other apartments, had a private lift. Instead, his lift led to his penthouse. We mentioned earlier that each resident would have a designated space for around three to five cars. Well, Mallya used to get a cark park area that could accommodate 100 cars and another designated area where he could showcase his collection of vintage cars.

BONUS: If you are someone who is aspiring to become wealthy and do not end up like hmm..you know whom I am referring to here:/ I highly recommend you to read this book The Psychology of Money by Morgan Housel. The author takes us through the timeless lessons on Wealth, Greed and Happiness. Here’s the link to the book: The Psychology of Money

However, in previous years, UBHL sold seven flats for a little over ₹ 150 crores, according to the company’s 2015 annual report

Fact 8: It made headlines when it was announced

Being the most expensive and luxurious project in the city, the announcement that the Kingfisher Towers were going to be built made headlines among many Indian newspapers.

Times of India was the one to first announce that Vijay Mallya was demolishing his ancestral home on Vittal Mallya Road to make way for his ultra-luxury 34 storey project.

However, the project originally was going to have around 100 units in three different sizes. The plans changed to have apartments of one size of 8,000 square feet due to something that actually made sense. Many millionaire buyers didn’t like the idea of there being different apartment sizes, as this could possibly cause an ego clash between them. I’m sure no one would want to have to deal with a group of millionaires squabbling on who has the biggest apartment in the Kingfisher Towers, so they settled down for what we know today. Still doesn’t change the fact that it’s ultra-luxurious.

As you’ve probably guessed, most of those who buy or rent apartments at the Kingfisher Towers are CEO’s, investors and end-users who want to retire at the tower. Considering the prices for each apartment, it’s no surprise that they are.

Check our other real estate based blogs

1. Who is the owner of Prestige Kingfisher Towers?

Ans. Vijay Mallya is the owner of this luxurious property and is managed by United Breweries

2. Are there any flats available in Prestige towers?

Ans. Yes. If you are interested to buy any luxury property here then visit www.cbvalueaddrealty.in for the listings

3. How many floors are there in Kingfisher Towers?

Ans. The Prestige Kingfisher Tower is considered a high-rise residential apartment comprising of 3 Towers of 34 floors each

2 thoughts on “10 Interesting Facts about the Kingfisher Towers”

Here I am with my magic crystal ball ready to see the Real Estate world post COVID.