THE STATUE OF UNITY

Who doesn’t know the Iron Man of India? Everyone knows. Sardar Vallabhai Patel is called the Ironman of India. The statue of unity is a tribute to this legendary man, who fought in the freedom struggle. Statue of Unity Symbolizes the unification of India & this was desired by the present Prime Minister of India Narendra Modi. 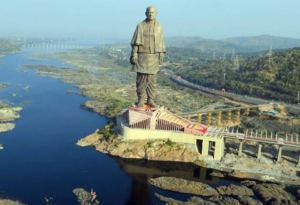 We are still in the month of Independence Day & recently India celebrated 75th Independence day on August 15th. I am proud of sharing this excellent information about the world’s tallest statue.

Let’s get started & I hope many of them know only a few of them.

Do you know who designed the statue?

The statue of unity was sculpted by Padma Shri and Padma Bhushan awardee Ram V. Sutar. Another famous work of Ram V Sutar is the statue of Mahatma Gandhi in Hanover.

The Statue of Unity has a viewing gallery at 153 m, which can accommodate up to 200 visitors at a time and has a serene and panoramic view of the dam, Satpura and Vindhya mountain ranges. The statue is located on a river island called Sadhu Bet near Rajpipla on the Narmada River. The statue is so well-paced that it gives a view up to a 200 Km long reservoir and the surrounding environment.

Larsen & Toubro was given the responsibility of the Statue of Unity project for designing, engineering, construction, operation and maintenance. The budget of the Statue of Unity stands at approximately INR 2989 cores. This also becomes the topic of discussion. Larsen & Turbo had to overcome so many challenges in the process of completing the project. They overcame it so well, with advanced engineered innovations and technology. Over 3,000 workers, including 300 engineers from Larsen & Toubro (L&T), were involved in the project.

Tons of Materials Were Used

Around 210,000 cu.m. of cement concrete is poured into the statue, 18,500 tons of reinforced steel, 6,500 tons of structural steel, 1,700 tons of bronze, 1,850 tones of bronze cladding made up of some 565 macro,6,000 micro panels & 5,000,000 kg of iron sourced from Indian farmers as a part of the ‘Loha Campaign’ is used in the construction. The Project was ready before the deadline. The construction time for the Statue of Unity was fixed to 42 months but it was ready in 33 months. It is constructed on the river island called ‘Sadhu Bet’ which is about 3.2 Kms from the Narmada Dam.

The Statue is Designed to Withstand the Natural Disaster

The statue of unity is designed to withstand natural disasters like earthquakes, floods, and high-speed storms. The statue will be able to withstand an earthquake of 100 km/sec and wind velocity up to 60m/sec. Scientists and engineers have done spot research very well. To design the walking pose and chappal feet made the statue slender at the base, which is against the construction. There is also a gap of 6.4 m between the two feet because of the pose which is designed to withstand strong winds. 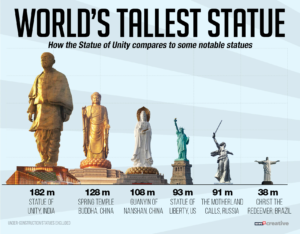 The Statue is built on a Solid Base

The statue is placed on the 3-Storey base. The base has a memorial garden on the ground and a large museum depicting the life and achievements of Sardar Vallabhai Patel.

There is also a 3 Star hotel Shrestha Bharat Bhavan adjacent to the Statue of Unity. The hotel has amenities like conference rooms & food service. It has also built high-speed elevators that will take you to a height of about 400 feet from the bottom of the statue. About 200 people can stand at any given point of time on a platform close to the chest of the statue.

The bronze cladding of the statue is made by China’s Jiangxi Toqine Company. Since Bronze changes its colour due to weather conditions, the statue may turn green over the years.

Isn’t it interesting? The statue is more interesting than the facts. It is the pride of India. Make sure to visit this statue & experience the aura of the place. If I have missed any facts let me know in the comment section, and subscribe to our newsletter for more interesting content.

One thought on “THE STATUE OF UNITY-SARDAR VALLABHAI PATEL STATUE”

About Us
Contact Us
Our Team
Videos
Testimonials
FAQ
Join Us